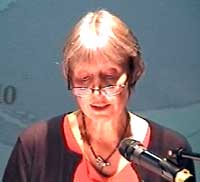 I started writing poems when I was a teenager. In those days I used to write them on my rose-patterned bedroom wallpaper. I also used to draw then (not on the walls) and some people say my poems are like paintings. They give a clear picture.

For some reason I stopped writing in my thirties. Then one year my sister gave me The Artist’s Way for my birthday, which prompted me to start again.

I lived in Greece for twenty five years. There I went to a women’s writing group for five or six years. We met twice a month in a beautiful, peaceful house and had to write on the spot. That was a useful discipline to acquire.

I joined Writers Without Borders in 2008 when I came back from Greece.

I suppose I write about the pull of two different cultures and two very different landscapes. Loneliness and longing come into it too. Recently I’ve been writing about ageing as I watch my mother struggling to cope.

Boys jump off rocks
into the sea.
Lithe and darkly-tanned,
they do backward somersaults
and jumps that make
maximum splash,
shouting to one another
all the while.

Elderly ladies swim,
stately as ocean liners,
in hats and sunglasses,
or sit in low chairs
on the white pebbles,
their skins brown and leathery
from the many summers
thus passed.

Shoals of tiny fish,
unperturbed by the swimmers,
glide between the wrecks
of seaweed-covered litter bins
snatched from the beach
by high winter tides.

On the far side of the bay
the red cliff rises sheer
to the pine trees and car park,
where the lucky flats look on.
Beyond the diving rock
the dust-coloured hillside,
bare save for dots of bushes,
lies in the midday sun.

And the sea glitters on
silver and blue
as far as the grey line
of shadowy hills
that separate it from
the dazzling sky.

Author of novels Dare to Love and Betrayed www.pennydixon.com poetry anthology Raw www.cymbalspublishing.co.uk and blogger www.writingcreativelywithspirit.com
View all posts by predencia →
This entry was posted in Member of the Month. Bookmark the permalink.